I'm always on the lookout for new healthy recipes that still taste delicious and aren't boring or bland. I recently tried a new recipe and wanted to share for those of you out there also looking for those delicious healthy recipes. Overall it was a success- there are a couple things I'll want to tweak or remember for next time but lucky for you I'm going to share those here too.

I like to gather all of my ingredients ahead of time so that everything is ready for me as I need it. So I grabbed my kale, sweet potatoes, shallots, red pepper, cumin, paprika, red pepper flakes, salt, pepper, olive oil and eggs. 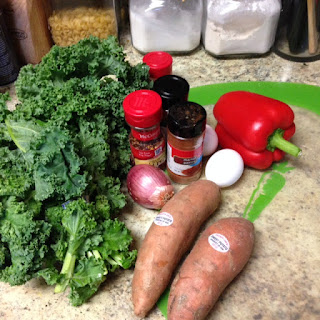 The original recipe called for frozen kale but it was much more reasonably priced to buy it fresh at my grocery store- but I'm sure the frozen would have been fine. Now I need to pause for a moment to talk about the kale. This was the first time EVER that I had tried kale and I have been so skeptical up to this point. I've always held my ground saying that kale is a garnish for the side of your plate not something to be eaten. As I've made my move towards healthier, clean eating kale comes up a lot and so I've been looking for a recipe that I thought seemed yummy enough that it would be a good time to try my first kale. This seemed like a winner because I love breakfast food and that idea of sweet/salty that I thought you might get here so I went for it. We'll come back to my final thoughts on kale later ;) 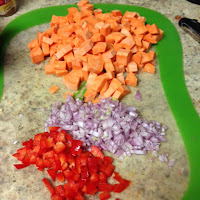 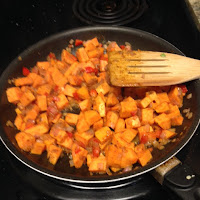 I went ahead and diced my potatoes, shallots and red pepper all in similar size- it's a hash so you want all your pieces to be close in size so things cook around the same amount of time and all get
properly cooked. I went for a smaller dice to cut down on how long I would need to cook the potatoes but that's a personal choice. After things were diced I went ahead and threw the potatoes, shallots, pepper and spices into a skillet with some oil in it over medium high heat and let them get cooking.

The original recipe has the kale (if using fresh instead of recommended frozen) going in the skillet in the last five minutes. Being a kale newbie I felt like that wasn't going to be enough time to get soft enough for me since kale is so thick and tough so I cooked it in it's own skillet for about 7 minutes in some olive oil and lemon juice while I was cooking the potato mixture- and then still added it back in for the last 5-7 minutes of potato cooking. 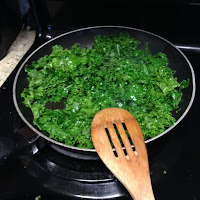 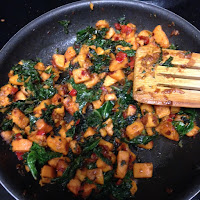 After everything had mixed together I had a genius idea of what this recipe needed...MAPLE SYRUP!
I know, I know- inspired! It seemed like just the thing to tie everything together, really bring out the warmth that the cumin was bringing to the dish and caramelize those potatoes a little bit. So I added in about a tablespoon or 2 of maple syrup. I didn't measure it so it would just be to taste.

The last step of the process was to poach my eggs- I chose to do two eggs since this was my dinner but again personal preference. I used my egg poacher and my eggs were a little over done but still delicious. And voila! 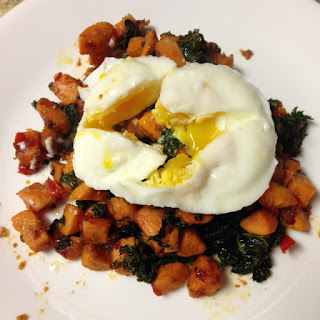 So my final thoughts? The flavor was wonderful, I loved the warmth of the cumin with the sweetness of the syrup. The runny egg yolk mixed with the potatoes? Delicious! Then there was the kale- overall it wasn't bad and I did eat it. But...if I were making this again which I definitely will I think I'll be swapping out the kale for some spinach instead. Still has loads of nutritional value but to me its much more appealing.

I hope you enjoy! If you try it please comment to let me know what you think. Recipe is below as well as a link to the original.

1. Heat a skillet over medium high heat with about 2 tbsp of olive oil.
2. Throw in your diced potato, shallot, pepper as well as all of the spices- let cook for about 15-18 minutes
3. Meanwhile finely chop the kale and put it in a separate skillet with some olive oil and lemon juice - cook over medium heat for about 5-7 minutes until wilted and softened
4. Mix kale in with the potato mixture for the last 5-7 minutes of cooking
5. Add in maple syrup if desired and cook mixture until potatoes are tender
6. While the mixture is finishing cooking- poach your eggs (could also do fried)
7. Put mixture on a plate and top with eggs

So after jumping back onto the blogging band wagon I slipped off a little bit as the end of the school year really caught up with me. The end of the year is such a busy time filled with a million fun things to do with the kids but also a million not so fun things to do to wrap up the year. Yes we get field day and beach day and game day but we also get reading benchmarks, permanent records and report cards.

Oh and did I mention I had to pack up my entire classroom and move it to the opposite end of the building? I am officially going to be teaching kindergarten next year (after being in 3rd grade for 3 years) and while I am very excited about the change the kindergarten hall is about as far from my old room as possible so it was a bit of a task to pack up my things and get them moved down there. I definitely got my workout in on those days! 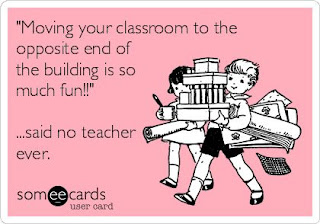 After all of this business summer break officially began and I could not be more excited. I was very ready for the much needed rest and have already really enjoyed my time off. I decided that this summer I was going to be intentional about relaxing and resting. Having to plan out relaxing may seem silly and frankly counterproductive but for me I have to remind myself that it's ok to just relax and rest. 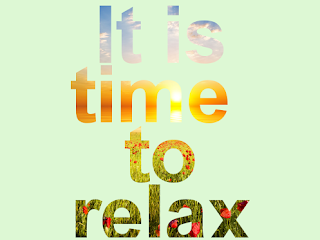 So the month of June? No school work. No prepping for next year. No classroom crafts. I'm even avoiding the education section of pinterest.
Instead I'm focusing on saying yes to the fun things around me. Last minute plans with a friend? Absolutely. Getting a snow cone in the middle of the day just because? You bet. Mani/pedi with my mom? Of course! Plus plenty of time out by the pool with a good book. 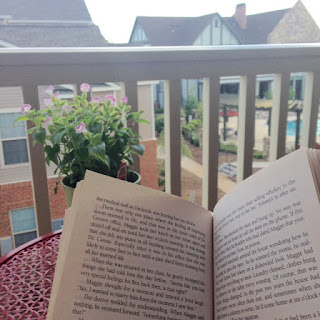 Teaching is a tough profession. It is tough physically, mentally and emotionally so the summer is an important time to rest and renew so that I will be ready for those sweet little faces that will greet me in August.

Now accepting book recommendations in the comments :)
Posted by Maggie at 6:36 PM 3 comments: