I had several posts I was hoping to write between 4 months and 5. I had hoped to share a little bit more about JB’s baptism and also about Halloween and our recent trip to Charleston. I am still hoping to get to them (we’ll see!) but for now, it seems time has flown and it’s already time to share 5 month stats. The way time flies blows my mind. Some of the days (or a lot of them) feel long but when I get to one of these posts it’s like I can’t figure out where the days have gone! 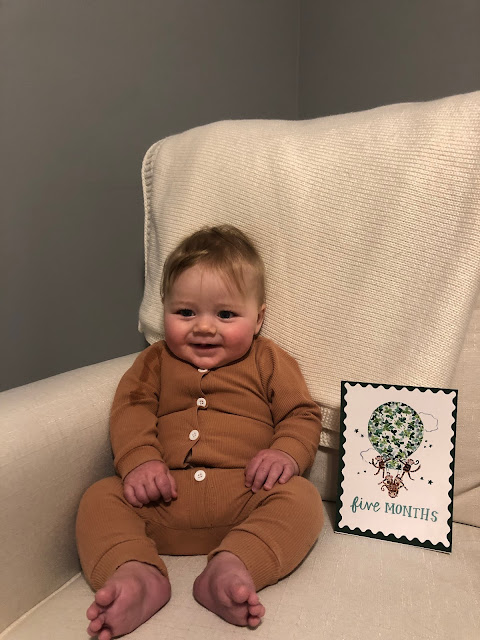 Weight: 18lbs 14 oz…Now he was fully dressed during this weight check since it was for a sick visit (more on that later). Usually he gets weighed in nothing so it may be a little skewed but either way I think we can agree he isn’t missing any calories!

Height: No height this month since he hasn’t been measured at the doctor and I wasn’t able to find the measuring tape at home. So stay tuned for next month!

He still loves being outside! Which with the weather turning is starting to become a little trickier. But he is so happy out there so we’re bundling up and going out there anyways! He also has started using his activity center and he’s a big fan of the little piano on there. He still loves his mat but is definitely enjoying more belly time than last month. He is enjoying going for walks more and is also starting to be more interested in books which is extra exciting for this book loving mama. A few of his current favorites are Goodnight Moon, The Very Hungry Caterpillar and If I Were a Dinosaur.

He is still a genuinely happy baby with few dislikes. However a slightly unfortunate change we’re noticing is he isn’t as happy in the car as he used to be. Because he’s awake for much longer stretches now that also means he doesn’t just go to sleep as soon as we hit the road. And he is a busy boy so he seems to get bored during any longer car rides. He’s still good just out and about town but we took a few longer drives this past month and did have to deal with a few bouts of a very unhappy baby. He is also not a fan of antibiotics. Poor buddy had an ear infection and giving him his medicine was a bit like wrestling a mini alligator. 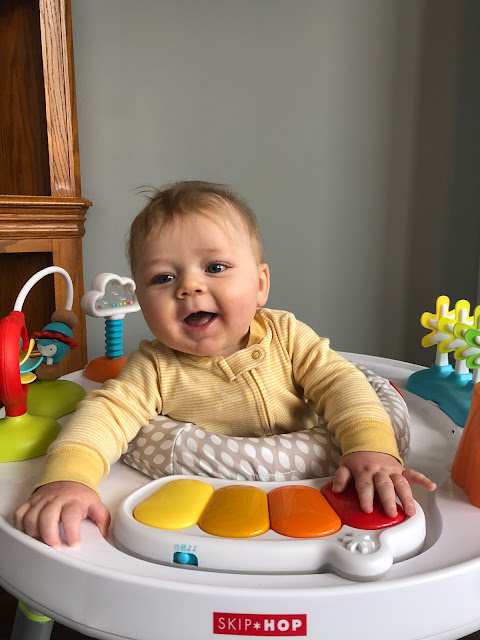 We are moving into a more predictable routine and I don’t want to jinx myself but it is very exciting! He is able to stay awake for much longer stretches so he’s awake anywhere from 2-3 hours in between naps- usually a little closer to 2 hours in the morning and right before bed but longer in the middle of the day. Right now (as in the last few days) he is taking 3 naps a day. He is getting up around 6-6:30 (a literal answered prayer after weeks and weeks of 5-5:30 wake ups). He takes his first nap anywhere between 8-9 and this is usually his longest nap but that’s not a guarantee. Once he’s up it’s eating and playtime and a lot of times this is when I like to get out for the day for errands and such. He will also take an afternoon nap somewhere around 12-1 followed by more eating and playtime and then one more nap (usually a short one) around 4-4:30. Bedtime is still somewhere between 7-8 depending on where that last nap fell. Then he will usually sleep well for the night with typically only one wake-up to eat sometime around 4ish usually. Then he’ll do his last little stretch before waking for the day. During playtime we do a lot of mat time both on his back and his belly. And woohoo he is finally rolling! So we’re practicing that skill as much as we can! We’ll head outside when we can, or go for a walk. We run errands, play in his activity center, sit in his high chair for practice while I make lunch, read books, FaceTime his cousins and anything else I can think of to keep him entertained! 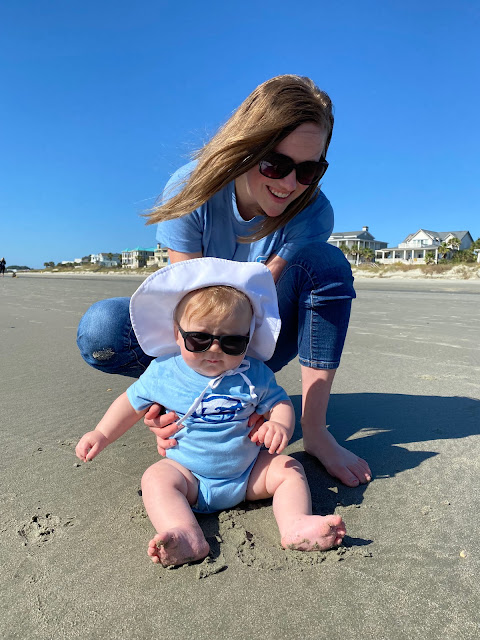 This was an easy one this month! We went to Charleston for homecoming at The Citadel and we got to take JB to the beach for his first time. He got to see the ocean and put his feet in the cold ocean water. He got to squish his toes around in the sand and hear the delightfully peaceful sounds of the waves and I loved getting to show him! It was also a particularly special and meaningful trip in my own heart because the last time we were there was 3 years ago. It was also for homecoming and it was the start of mine and hubby’s relationship. And it was so sweet to me, to be back there 3 years later married with our baby boy. It had me looking back over the last few years in awe at God’s goodness in my life. 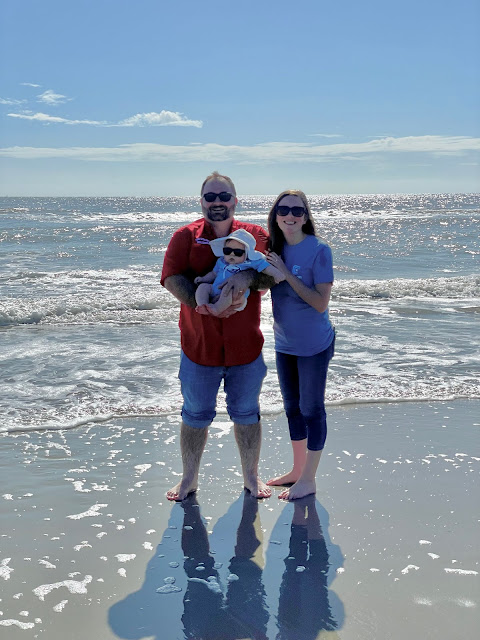 Next month is going to be a big one…his first Thanksgiving is coming up! And his first food is most likely going to be thrown in there anytime now so I can’t wait for the excitement that is coming!