It's been one month with our precious James Boyd. We are still completely smitten with him and are just loving life with him in it. We've been getting to know him and trying to figure out this whole parenting thing over the last few weeks.
One month Stats:
Weight- The most recent weight I have on him is from two weeks (9lbs 7oz). He doesn't go back to the doctor until two months so we'll have to wait on an updated weight for now. But I feel confident he's probably nearing 11lbs at this point. He's a chunky little thing and loves to eat!
Likes- Being held and being in motion. He wants to be rocking or bouncing or rocking or swaying and he always knows if you try and sit down. He likes to eat, be sung to and loves to take a nap on mom or dad, he's grown into a fan of bath time and any sounds of running water. He loves to be in the car as long as its moving and most of the time enjoys going for walks in his stroller. He loves to look out of our big living room windows at the clouds and in general loves to be outside. He likes tummy time most of the time and is pretty impressive at lifting his head and looking all around. 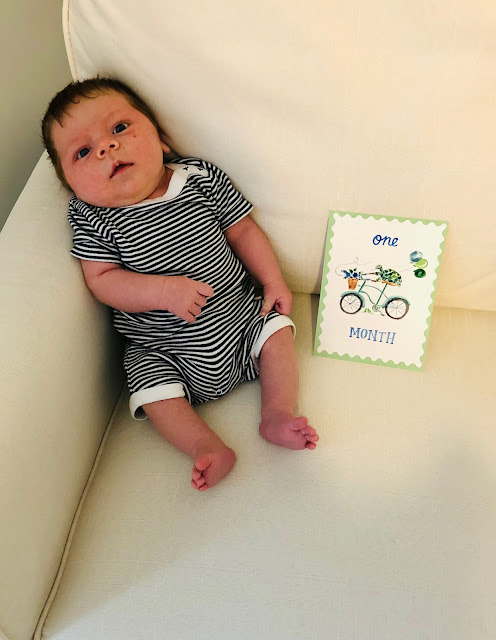 Dislikes- Anything that is not listed above. Kidding. Sort of. He isn't what we would describe as a super laid back baby so he can get a bit fussy if he isn't be held and bounced, eating or sleeping. But he's settling in more and we're all finding our groove. He does not like to be put down or be still- my mom tells me  I was like this also. We love the snuggles and are definitely getting our steps in! He doesn't like to be hooked into his carseat (he loves to be in the car but getting buckled not so much). He doesn't like to wait for food once he decides he's hungry (typically as soon as he opens his eyes from a nap). And so far he isn't a big fan of the swing either. 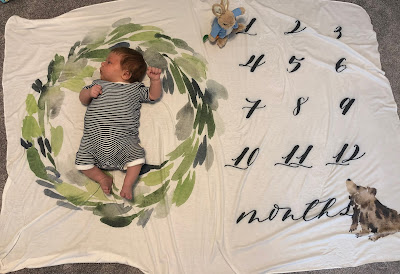 Sleeping and Eating - During the day he eats pretty much every 2-3 hours followed by a short amount of awake/play time and then hopefully down for a nap. Daytime naps are a bit tricker than nighttime right now and he mostly wants to sleep on me. Which I love! But also, trying to get him napping in his bassinet or crib at least once during the day. At night I no longer wake him to eat and he is kind enough to usually give me one slightly longer stretch of sleep at the beginning of the night. Last night- his first official night as a one month old he slept from 9:30 to almost 2:30! It was glorious. The rest of the night he usually wakes after about 2 1/2 hours. He definitely loves to eat and is growing, growing, growing! As you can see he already looks almost too big for his little milestone blanket...1 year will look interesting!
Favorite Moment- Well obviously this month this is an easy one- his birthday! But a few of my other favorites would be all of our first outings like first time to a restaurant and first trip to Costco. I love doing things as a new little family! Also, watching my husband with him is my favorite always! He's so sweet with him and it gives me all the feels.
Overall month one has been exciting, overwhelming, exhausting and amazing. We can't wait for what's next! 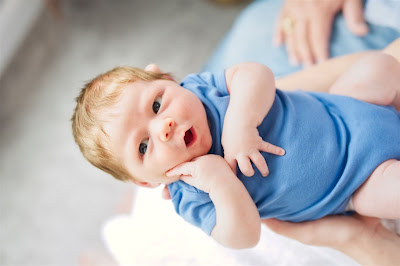