"Wait, you're getting what?"

When I told my family that  I had decided to adopt a retired racing greyhound, the general response was that of confusion. Why would I get a greyhound? What a random and out of the blue choice,

But I had done my research. I had been living on my own for almost two years and had just moved into a new apartment. I was ready for a dog. I was looking for a dog that would be ok in a smaller space, and wouldn't need too much exercise. Obviously I didn't have a yard, and I also had a job that would have made hours of exercise a day a challenge. And what did the internet tell me was a great dog for me? A greyhound. 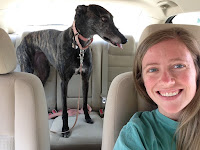 Greyhounds are the 40mph couch potatoes. A quick burst of energy, followed by hours of sleep, curled up in their favorite spot. Lucky for me, there was an adoption group nearby and I got started. Because greyhounds are used in racing, most greyhounds up for adoption aren't 8 week old puppies. I actually loved this, because it meant I didn't have to trot a puppy up and down 3 flights of stairs 10 times a day. I watched the website for dogs to become available for adoption and then one day her face showed up.

She was smaller for a greyhound, "only" 56 pounds just about to turn 3 and they described her as a happy girl, always wagging her tail. I knew she was the one for me. And their description was almost perfect. She is the happiest of girls and that tail does a lot of wagging. But there is so much more about Gemma that I love. She is the sweetest and most gentle dog.

She's the most well-behaved, well-tempered dog. Family has even said she's essentially just a giant stuffed animal because of how easy she is. She loves her people and I've always called her my little velcro dog because she is usually stuck right to my side or someone else's. She's quirky. Her ears can tell me how she's feeling with their ever changing positions. She's nervous and anxious about new places. And she hates to be left. 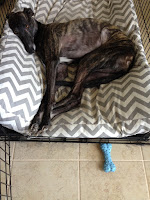 She's a terrible guard dog but the best snuggler. She loves cheeseburgers- her favorite birthday treat. She curls up in the funniest places and would let you pet her for hours on end if you're up for it. She's patient- with toddlers that are too rough, or her new chihuahua brother with never ending energy. She's the best dog. 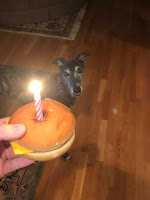 "You're getting what?"- what everyone said when I first told them about Gemma. But now, every single one of them agrees- she was the best choice I could ever make.
She's been with me through all the things over the last 7 years. She's got more grey on her face than when we first met, and she doesn't move quite as fast but she is still every bit the sweet, happy girl she was the day I picked her up and brought her home.
This month I am linking up with "Two Writing Teachers" for a slice of life, daily writing challenge.