Last night I had a dream about grocery shopping. Nothing crazy or out of the ordinary, just grocery shopping and the biggest drama was that I felt like I spent too much money for not enough food. When I woke up, I had that experience of not being entirely sure if it was a dream or real. And as I determined that it was in fact a dream, I laid in bed and thought to myself... "Well I guess I'm officially a grown up." The day-to-day tasks of being an adult aren't just part of life they're also part of my dreams.

When I was a kid I thought being a grown up meant being 18 and independent and maybe for some it is. I definitely did not feel like a grown up at 18 though. I may have been living away from home but was still very much my parent’s child. Then I started to think that maybe you’re a grown up when you graduate and get a job, when you’re own your own in the real world. And sometimes that felt true but other days I still felt a bit like I was playing “house”. Or there would be times when I would look around for a grown up to handle a particular situation only to realize I was that grown up.

And then there are the days when I dream about grocery shopping, or tell my new husband that our cordless vacuum cleaner is the best gift ever, or when I say to a fellow teacher "kids these days...followed by some sort of generation gap reference. These tiny little things that indicate, whether I feel it or not, I am smack-dab in the middle of "grown-upness".

This month I am linking up with "Two Writing Teachers" for a slice of life daily writing challenge. 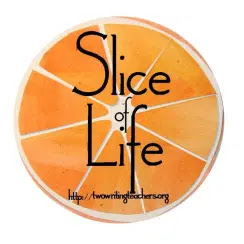